Not Bad for Delancey Street: The Rise of Billy Rose

Billy Rose was the inspiration for the most memorable character in movie history: Humphrey Bogart's Rick in Casablanca.

Hear all about it at New York's Performing Arts Library, Dec. 12 at 6pm.

Another evening of Billy Rose songs and stories is scheduled at the venerable and irreverent Coffee House Club on Sept. 18.

"Mr. Cohen has a fascinating tale at his disposal, and he recounts it with relish. Then, too, he enjoys the advantage of a colorful cast of characters, including a circle of friends that runs from statesmen to gangsters while centering on Manhattan's talent elite."

"Research for his book is terrific. Mark Cohen has a discerning ear for illuminating anecdotes and lively quotes. (There are also excellent photo plates.)

"His theories as to motivation seem logical and likely. Though sympathy and admiration for his subject are clear, history is not viewed through – excuse me – rose-colored glasses."

Cohen ably describes Rose's mind-bending shows and productions . . . and also chronicles his efforts to aid European Jews caught up in the vortex of WWII and to support the newly created Israeli government by, among other things, helping engineer a cloak-and-dagger arrangement to secure military arms.

On May 16 at 92Y I told the story of Billy Rose the hardboiled nightclub owner and Billy Rose the secret rescuer of a Jewish refugee. Both sides were as crucial to Rose as they were to the character of Humphrey Bogart's Rick in Casablanca.

It's not a coincidence. The NY Jewish playwrights who created Casablanca's Rick modelled him on Rose.

This year's Rose anniversaries include:

What we're reading: This article in Forward looks into the true identity of Rick ("Here's looking at you, kid"), from "Casablanca." Dan Saltzstein, our special projects editorial director, dares you not to get sucked in: "It turns out the man behind the character was a Jewish songwriter and impresario from New York named Billy Rose."

On May 21, members of the Dutch Treat Club got a big kick from my Billy Rose talk, I'm happy to report.

"Hi Mark your talk and todays program were a wow! Thank you," wrote Dutch Treat board member Mary Holloway.

The May 21 program took place at The Players Club, at Gramercy Park, New York, with terrific Rose songs delivered by Marcus Goldhaber, Raissa Katona Bennett, Karen Oberlin, and Paula Dione Ingram. A big thank you to all the above and also pianist Ian Herman.

A talk with Gotham about Billy Rose

The Gotham Center for New York City History runs this excellent blog. Rose is a natural subject for the site. Nobody outdid Rose when it came to being a New Yorker.

"Billy loved many things, but the deepest of his loves was the city of New York," wrote his journalist and screenwriter friend, Ben Hecht. Writer Abe Burrows, of Guys and Dolls fame, knew what made New York tick and "couldn't bear the thought of a New York City without Billy Rose."

This review in Washington Jewish Week correctly notes that, "The author does chronicle Rose's shortcomings, but in the end, is clearly in the showman's corner."

And how. The guy was a marvel.

Harvard's Ruth Wisse had kind words for my Billy Rose biography in her thoughtful JRB article about Saul Bellow, his take on Billy Rose in his The Bellarosa Connection, and my contribution to the Rose story.

About the conclusion to my biography, where I argue that Rose "met the challenges of American Jewish life on both fronts with all the intensity and joy and enthusiasm and caginess and wariness and toughness that his dual inheritances encouraged and required," Wisse wrote, "This is a fine summation of Cohen's rightful claim of Broadway Billy Rose for the Jews . . . He is not mistaken, either, in sensing that Bellow found some virtue in both the man and his type."

Bogart's Rick was based on Billy Rose 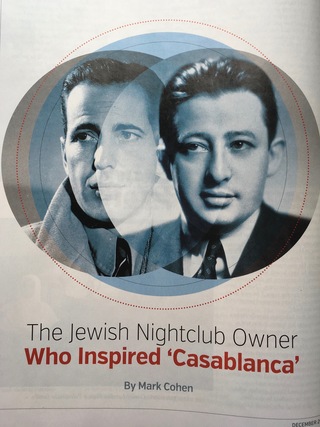 The Forward published my argument that the character of Rick Blaine, played by Humphrey Bogart in the legendary Hollywood film, Cascablanca, was based on Billy Rose. Casablanca was based on the unproduced play, Everybody Comes To Rick's. It was written in New York in 1939-40, when Rose ran the city's two greatest nightclubs, Billy Rose's Music Hall and Billy Rose's Diamond Horseshoe, and when his name touted the New York World's Fair's most popular attraction, Billy Rose's Aquacade. The play's nightclub setting and tough New York club owner were preserved in the film. Rose's influence has been overlooked, until now.

"A richly detailed, painstakingly researched, and highly absorbing critical biography of the great theater and music impresario Billy Rose. The story he tells is a once individual and universal, specifically Jewish and entirely American." — Noah Isenberg, Los Angeles Times-bestselling author of We'll Always Have Casablanca

"Once an impresario who orchestrated an unceasing string of show business successes, once an inescapable object of half a century of ballyhoo, Billy Rose has long needed to be rescued from the obscurity into which his singular career has sunk. Mark Cohen has now performed that salvage operation, with a mixture of judicious sympathy and critical detachment." Stephen Whitfield, author, In Search of American Jewish Culture

"A meticulously researched study of the impresario/philanthropist Billy Rose, a figure rich in contradictions: on the one hand, an anonymous altruist (working to rescue Jews from Nazism), on the other, a hard-nosed self-publicist, possessor of what Saul Bellow called 'a buglike tropism for celebrity.' Fascinating." Zachary Leader, author, The Life of Saul Bellow